Source: The Diagnostic and Statistical Manual of Mental Disorders, Fifth Edition (DSM-5). Click HERE to purchase. — NOTE: DSM IS AN INVALUABLE BOOK TO HAVE TO HELP YOU UNDERSTAND VARIOUS BRAIN DISORDERS. THIS POST IS AN EXCERPT FROM THE BOOK (DSM5). TO GET MORE INFORMATION ON ANY SPECIFIC BRAIN DISORDER, YOU CAN PURCHASE THIS BOOK OR FIND IT AT YOUR LOCAL LIBRARY.

A. Preoccupation with one or more perceived defects or flaws in physical appearance that are not observable or appear slight to others.

B. At some point during the course of the disorder, the individual has performed repetitive behaviors (e.g., mirror checking, excessive grooming, skin picking, reassurance seeking) or mental acts (e.g., comparing his or her appearance with that of others) in response to the appearance concerns.

C. The preoccupation causes clinically significant distress or impairment in social, occupational, or other important areas of functioning.

D. The appearance preoccupation is not better explained by concerns with body fat or weight in an individual whose symptoms meet diagnostic criteria for an eating disorder.

With good or fair insight: The individual recognizes that the body dysmorphic disorder beliefs are definitely or probably not true or that they may or may not be true.

With poor insight: The individual thinks that the body dysmorphic disorder beliefs are probably true.

With absent insight/delusional beliefs: The individual is completely convinced that the body dysmorphic disorder beliefs are true.

Individuals with body dysmorphic disorder (formerly known as dysmorphophobia) are preoccupied with one or more perceived defects or flaws in their physical appearance, which they believe look ugly, unattractive, abnormal, or deformed (Criterion A). The perceived flaws are not observable or appear only slight to other individuals. Concerns range from looking “unattractive” or “not right” to looking “hideous” or “like a monster.” Preoccupations can focus on one or many body areas, most commonly the skin (e.g., perceived acne, scars, lines, wrinkles, paleness), hair (e.g., “thinning” hair or “excessive” body or facial hair), or nose (e.g., size or shape). However, any body area can be the focus of concern (e.g., eyes, teeth, weight, stomach, breasts, legs, face size or shape, lips, chin, eyebrows, genitals). Some individuals are concerned about perceived asymmetry of body areas. The preoccupations are intrusive, unwanted, time-consuming (occurring, on average, 3-8 hours per day), and usually difficult to resist or control.

Excessive repetitive behaviors or mental acts (e.g., comparing) are performed in response to the preoccupation (Criterion B). The individual feels driven to perform these behaviors, which are not pleasurable and may increase anxiety and dysphoria. They are typically time-consuming and difficult to resist or control. Common behaviors are comparing one’s appearance with that of other individuals; repeatedly checking perceived defects in mirrors or other reflecting surfaces or examining them directly; excessively grooming (e.g., combing, styling, shaving, plucking, or pulling hair); camouflaging (e.g., repeatedly applying makeup or covering disliked areas with such things as a hat, clothing, makeup, or hair); seeking reassurance about how the perceived flaws look; touching disliked areas to check them; excessively exercising or weight lifting; and seeking cosmetic procedures. Some individuals excessively tan (e.g., to darken “pale” skin or diminish perceived acne), repeatedly change their clothes (e.g., to camouflage perceived defects), or compulsively shop (e.g., for beauty products).

Compulsive skin picking intended to improve perceived skin defects is common and can cause skin damage, infections, or ruptured blood vessels. The preoccupation must cause clinically significant distress or impairment in social, occupational, or other important areas of functioning (Criterion C); usually both are present.

Body dysmorhic disorder must be differentiated from an eating disorder.Muscle dysmorphia, a form of body dysmorhic disorder occurring almost exclusively in males, consists of preoccupation with the idea that one’s body is too small or insufficiently lean or muscular. Individuals with this form of the disorder actually have a normal-looking body or are even very muscular. They may also be preoccupied with other body areas, such as skin or hair.

A majority (but not all) diet, exercise, and/or lift weights excessively, sometimes causing bodily damage. Some use potentially dangerous anabolic androgenic steroids and other substances to try to make their body bigger and more muscular. Body dysmorphic disorder by proxy is a form of body dysmorphic disorder in which individuals are preoccupied with defects they perceive in another person’s appearance.

Insight regarding body dysmorphic disorder beliefs can range from good to absent/ delusional (i.e., delusional beliefs consisting of complete conviction that the individual’s view of their appearance is accurate and undistorted).

Many individuals with body dysmorphic disorder have ideas or delusions of reference, believing that other people take special notice of them or mock them because of how they look. Body dysmorphic disorder is associated with high levels of anxiety, social anxiety, social avoidance, depressed mood, neuroticism, and perfectionism as well as low extroversion and low self-esteem. Many individuals are ashamed of their appearance and their excessive focus on how they look, and are reluctant to reveal their concerns to others. A majority of individuals receive cosmetic treatment to try to improve their perceived defects. Dermatological treatment and surgery are most common, but any type (e.g., dental, electrolysis) may be received. Occasionally, individuals may perform surgery on themselves. Body dysmorphic disorder appears to respond poorly to such treatments and sometimes becomes worse. Some individuals take legal action or are violent toward the clinician because they are dissatisfied with the cosmetic outcome.

Body dysmorphic disorder has been associated with executive dysfunction and visual processing abnormalities, with a bias for analyzing and encoding details rather than holistic or configurai aspects of visual stimuli. Individuals with this disorder tend to have a bias for negative and threatening interpretations of facial expressions and ambiguous scenarios.

The point prevalence among U.S. adults is 2.4% (2.5% in females and 2.2% in males). Outside the United States (i.e., Germany), current prevalence is approximately 1.7%-1,8%, with a gender distribution similar to that in the United States. The current prevalence is 9%-15% among dermatology patients, 7%-8% among U.S. cosmetic surgery patients, 3%- 16% among international cosmetic surgery patients (most studies), 8% among adult orthodontia patients, and 10% among patients presenting for oral or maxillofacial surgery.

The Diagnostic and Statistical Manual of Mental Disorders (DSM) is the handbook used by health care professionals in the United States and much of the world as the authoritative guide to the diagnosis of mental disorders. DSM contains descriptions, symptoms, and other criteria for diagnosing mental disorders. It provides a common language for clinicians to communicate about their patients and establishes consistent and reliable diagnoses that can be used in the research of mental disorders. It also provides a common language for researchers to study the criteria for potential future revisions and to aid in the development of medications and other interventions. 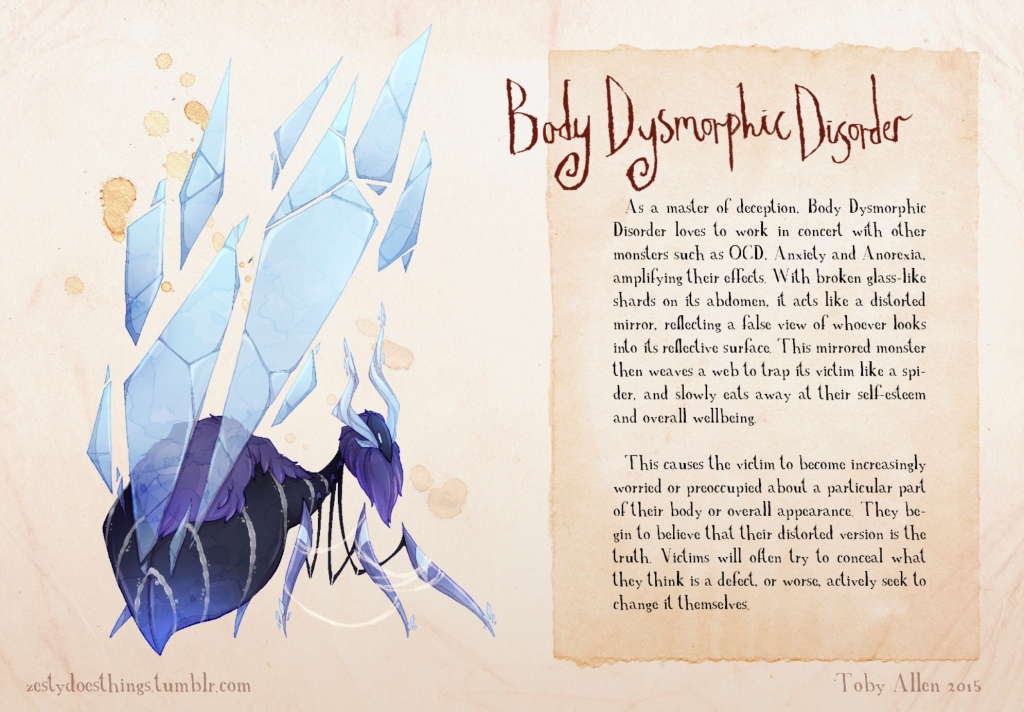